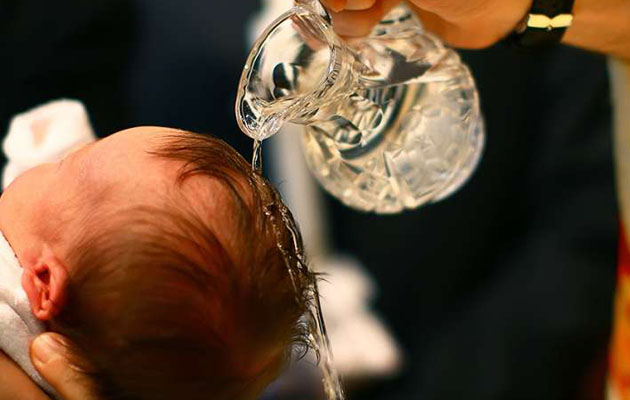 Baptism is one of the Seven Sacraments of the Catholic Church; frequently called the "first sacrament" as it is the gateway to the rest of the sacraments.

Through Baptism we are freed from sin and reborn as children of God; we become members of the mystical body of Christ, are incorporated into the Church and made sharers in her mission: "Baptism is the sacrament of regeneration through water in the word. (CCC: 1213)"

Baptism is usually conferred by pouring water three times on the recipient's head, while reciting the baptismal formula: "I baptize you in the name of the Father and of the Son and of the Holy Spirit" (Matthew 28:19).

Baptism is God’s most beautiful and magnificent gift. We call it gift, grace, anointing, enlightenment, garment of immortality, bath of rebirth, seal, and most precious gift. It is called gift because it is conferred on those who bring nothing of their own; grace since it is given even to the guilty; Baptism because sin is buried in the water; anointing for it is priestly and royal as are those who are anointed; enlightenment because it radiates light; clothing since it veils our shame; bath because it washes; and seal as it is our guard and the sign of God’s Lordship.

The Sacrament of Baptism is often called “The door of the Church,” because it is the first of the seven sacraments not only in time (since most Catholics receive it as infants) but in priority since the reception of the other sacraments depends on it. It is the first of the three Sacraments of Initiation, the other two being the Sacrament of Confirmation and the Sacrament of Holy Communion. Once baptized, a person becomes a member of the Church. Traditionally, the rite (or ceremony) of baptism was held outside the doors of the main part of the church, to signify this fact.

When deciding on godparents, you should consider Christian relatives or friends who